A year ago today, I was woken up by a text from my godson Dan.  The pope is resigning.

I don’t remember much of that day.  Life was a complete blur.  I had no appetite.  I tried to convince myself it was a dream.  Popes didn’t resign.

I had been saving money for the last eight years to go to Pope Benedict’s funeral and the resulting conclave.  I had never dreamed that there would be one without the other.  The money is still sitting there.

It still feels weird, when I stop and think about the fact that Pope Benedict is still alive.  The world has continued spinning, the Church has continued serving, and life continues on.  It’s easy to forget that he’s still within those Vatican walls, praying for us all, doing exactly what he thinks he should be doing right now.  When I do remember it, it makes my heart hurt a little.  Not because I don’t like Pope Francis, but just because I miss Pope Benedict.

I am quick to defend Benedict, while the world seems quick to judge.  It seems that if we are going to praise Francis and his pontificate, it requires a censure of Benedict’s pontificate, and that breaks my heart.  In most cases, this comes from people who don’t understand the Papacy.  But it still breaks my heart.

Someone asked me if I had read the Rolling Stone article on Francis, and I haven’t.  I can’t.  I know enough of what the author said to know that it would make me miserable.  I know the criticism is out there, but I also know it’s completely false.  It would break Francis’ heart too.  Just because Popes are different doesn’t mean they’re opposed.

I remain firmly convinced that Benedict was one of the greatest Popes to sit on the Chair of Peter, and someday his legacy will shine to its fullest.   Until then, I’ll continue to defend him against people who think criticizing Benedict is a way to praise Francis.

It was a day I’ll never forget:

And many memorable days followed, including the day of his first audience (pictured at the top of this post).  I left Rome in 2005 shortly after his election, only to return in 2008 to spend five glorious months seeing him almost every week.

I’ve always wanted to eat breakfast with him.  Strange, I know.  Not a formal dinner, not an official meet and greet, but breakfast.  A cup of coffee. A friendly chat.  It’s something on my bucket list that will never be crossed off this side of heaven.

So today my heart is a little sad.  Not because I don’t love Francis, but because I also love Benedict.  And I miss him. 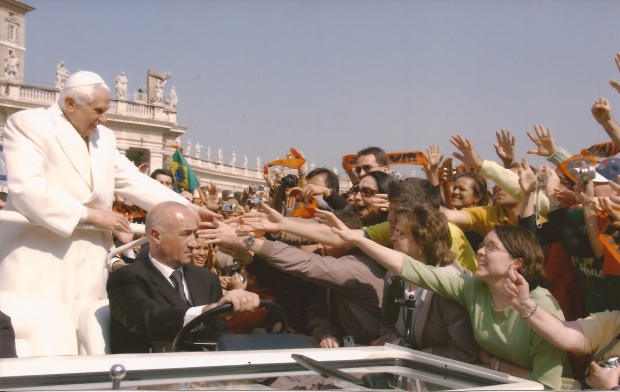 I'm a student living in Rome... and these are my experiences! View all posts by Joannie