Everyone should visit Rome during Lent.  Both times I lived there, I was blessed to experience the Lenten season.  It’s a remarkable time in Rome for so many reasons – celebrating the Triduum with the Holy Father and the universal Church, marking Fridays by climbing the Holy Stairs, being able to venerate the relics of the Passion at Santa Croce.  But my favorite Lenten tradition in Rome are the station churches.

Before the legalization of Christianity and the building of churches, Christians would gather in homes for the Mass. These churches were known by the names of their owners: titulus Pudentis, titulus Lucinae, etc. Priests were put in charge of each house church. By the end of the first century, the Church had grown large enough that there were many of these house churches in each city. To show the unity of the Church and to enable the Christians to gather on occasion with the whole community in the city, bishops began making visits to the churches in their area.

In Rome, the bishop was the successor of St. Peter and seen as the head of the entire Christian church. He visited the principle house churches in a similar fashion, and after the Peace of Constantine in 313 AD, churches were built near or on these sites.  Many of the churches also received relics of the early martyrs, so the practice of visiting these churches also became pilgrimages to the tombs of the saints.  By the fourth century, visits to these churches took on a penitential, pilgrimage character in the midst of the season of Lent. The list of stational churches has not significantly changed since Pope Leo III (795-816).

Thus, the stational churches are the oldest churches in Rome, and the pilgrimage to each of them continues today. Each stational church has a designated day (Santa Sabina, for example, is always Ash Wednesday). The North American College priests say Mass in English (along with the English College, Irish College, and Scottish College) at 7 AM in the morning. Masses can be heard in various languages throughout the day, and the day concludes with Mass at 5pm in Italian and Latin with the Collegium Cultorum Martyrum.

There are plenty of places online to find out more about the station churches. A great place to start is the website of the North American College.  The NAC guys played a large role in reviving the tradition, and in the cold spring mornings, before the sun rises, men in black leave their residences on the Janiculum Hill and Via dell’Umilta and walk to the station church of the day, regardless how far away it might be.

You can also find out more about my personal adventures at the various station churches here.

A perk of attending early morning station Masses with the NAC was worshipping with the English-speaking community in Rome.  My first Lent in Rome, it wasn’t unusual to see John Allen or George Weigel at Mass.  My second Lent in Rome, I went to school with several of the NAC priests and seminarians, so those of us who didn’t have to rush off to class would often get our morning espresso together. 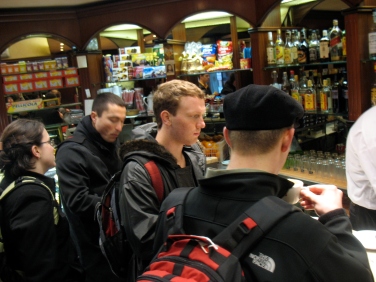 For a host of reasons, the station churches had a substantial impact on not just my time in Rome but on my faith life as a whole.  Every Lent since 2005, I’ve tried to incorporate them into my Lenten days, even if I’ve been thousands of miles away.

So I was quite pleased to hear that George Weigel and Elizabeth Lev had joined forces to produce a beautiful work called Roman Pilgrimage: The Station Churches.

I received it as a Christmas present, but I didn’t really crack it open until a few days before Lent started.  I knew the book walked through Lent, detailing each station church, so I decided to read it each morning, preferably before going to Mass.  Then at Mass, when I prayed my thanksgiving after Communion, I would close my eyes and place myself in the church of the day.  This has been my practice for the last few years, so I figured the book would help me do that, especially as the memories of eleven years ago grow dimmer. 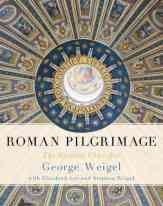 Each day, Weigel weaves together the daily Mass readings or parts of the liturgy of the Hours for the day.  Elizabeth follows his reflection with a description of the church and its historical and artistic high points.   I was so happy I had decided to read it each morning – I’m not sure how else you could read this.  It’s not meant to be read cover-to-cover in a few days, but to be savored throughout the Lenten season. Weigel’s reflections are masterful tapestries of spirituality, Scriptural meditation, and Lenten catechesis.

The station church pilgrimage can be, and in fact is, walked on many levels, not unlike the city in which it takes place. For Rome is so deeply layered by the accumulated stuff of centuries that the roads along which one makes the pilgrimage in the twenty-first century are many meters above the roads along which Gregory the Great would have led his people … Thus, along the pathways of the station church pilgrimage (and at whatever time of year it is walked), the twenty-first century pilgrim or visitor passes through multiple layers of the history of Western civilization and has the opportunity to ponder the rise and fall of empires…

… Making the station church pilgrimage is also a marvelous way to discover the many faces of Rome.  On the pilgrimage, one walks through the always-clogged and now-funky streets of Trastevere, crosses the high baroque Piazza Navona, breathes the early-morning aromas of the markets of the Campo dei Fiori, skirts the ruins of the Circus Maximus, and climbs up the beautiful Aventine Hill…

Yes, the early mornings were my favorite time to see the city.  But the pilgrimages were about more than sightseeing.  They were reminders of the bigger pilgrimage we are all on, whose ending will not be the earthly supper of the Lamb, but the heavenly one.  Weigel reminds us, “At yet another level, the station church pilgrimage — especially when it is made during Lent — is an itinerary of conversion. . . . the station church pilgrimage can become an extended retreat: seven and a half weeks of reflection that synthesize the truths of the Christian faith and offer pilgrims an opportunity to reflect on how well those truths have been integrated along the pathways of their lives.”

That is gift of this book.  A pilgrimage from your home – one that can be done from your couch, but one that will take you away from the comforts and acedia of what your life has become, and towards the holiness and life to which you are called.